Alpharetta boasts an unbeatable lineup of top-notch culinary hot spots and Alpharetta Restaurant Week is the perfect time for patrons to try a new restaurant or revisit a favorite. More than twenty-five Alpharetta restaurants will offer a special three-course dinner menu from $20 – $50 and many also offer three-course lunches for $16 -$35 (beverage, tax and gratuity not included). This week-long celebration of Alpharetta’s restaurant scene will take place Feb. 21 – 27, 2021. 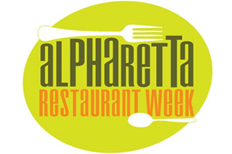 Alpharetta’s well-established and eclectic dining scene continues to break the mold and challenge the idea that big time flavors are only found in big cities. Whether checking out one of the 200+ restaurants, learning how to create mouthwatering dishes at one of Alpharetta’s cooking schools or picking up some fresh produce at the Alpharetta Farmers Market (Saturdays, April 3 – Oct. 30, 2021), visitors and residents see why Alpharetta is a foodie’s paradise.

Alpharetta restaurants have gotten creative with their outside dining areas in the colder months of the calendar. Many eateries throughout the city have added fire pits, heaters and even igloos to their outdoor spaces extending the al fresco season indefinitely. And, of course, diners can also BYOB (bring your own blanket) and cozy up to dine outdoors on amazing Alpharetta fare.

“The vibrant city of Alpharetta is filled with an abundance of locally owned and chef-driven restaurants,” said Janet Rodgers, president and CEO of the Alpharetta Convention and Visitors Bureau. “Events like Alpharetta Restaurant Week highlight these eateries and give locals and visitors the chance to try out a new restaurant or revisit one of their favorite spots. It’s also a great opportunity for diners to support these vital businesses and their staff members who are working hard to bring us exceptional cuisine every day.”

Reservations at restaurants are recommended. Diners are encouraged to contact the restaurants directly for operating hours. Alpharetta Restaurant Week is produced by Flavors Magazine.

With over 200 dining experiences, Alpharetta has become a premier dining haven making it the ideal foodie getaway destination. The icing on top of a great culinary vacation is a luxurious hotel stay at one of Alpharetta’s 28 modern and upscale hotels that are all centrally located to shopping, dining and fun things to do! For more information on where to shop, dine, stay and play in Alpharetta visit www.awesomealpharetta.com.

The Alpharetta Convention and Visitors Bureau serves as the official destination marketing organization for the city of Alpharetta, Ga. With so much to do, why not stay the weekend? Book a hotel stay at one of the Alpharetta’s 28 modern and upscale hotels directly at www.awesomealpharetta.com. Alpharetta was recently named “One of the South’s Friendliest Cities” by Southern Living Magazine and “One of the Best Places to Visit in Georgia” by Vacationidea.com.

And she waits .. for everyone to be home for the d

@lemacaronalpharetta opened a kiosk at Avalon in f

We had an incredible dining experience at @carsonk

I hope everyone had a Merry Christmas! Counting do

For a limited time only, journey into a one-of-a-kind experience where the world of Hot Wheels comes to life right outside your windows at Six Flags Over Georgia! Drive through this LARGER THAN LIFE showcase...