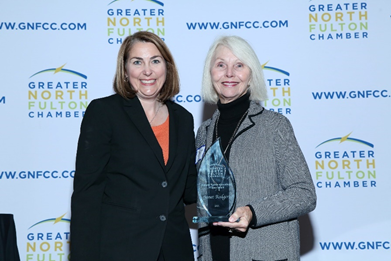 Women INfluencing Business (WIB) is a committee of the Greater North Fulton Chamber focused on advancing and connecting women in the North Fulton business community. Awards were selected by a committee of past winners. WIB programming and networking events are presented by Verizon.

Janet is also a co-founder of “Hospitality Highway” in 2005 and was the inspirational force behind creating a program that promoted the Georgia 400 corridor in the tourism and hospitality industry. Highlighting the seven communities that flank State Route 400 on the north side of Atlanta, the program directly provided those cities with an influx of growth in their respective markets. Through the creation of a website, print collateral, public relations efforts, and social media, each of the communities from Buckhead to Dahlonega, have benefitted from her passion for tourism and partnership.

The organizations Janet has supported with time, money and talent include Alpharetta Rotary, Innovation Academy, North Fulton Community Charities, and The Alpharetta Public Safety Foundation, among many, many others. In recognizing Janet, the Awards Selection Committee noted she is truly a community champion.

“The benchmark Janet sets for her team is ‘excellence’ and she models that in all she accomplishes,” said Gloria Mattei, Chair of the Awards Selection Committee and Co-Chair of the Chamber’s Women Influencing Business Committee.

“I am truly honored to receive the GNFCC’s Business Woman of Excellence Living Legacy Award,” said Janet Rodgers, President and CEO of the Alpharetta Convention & Visitors Bureau. “I care deeply about all the health and wellbeing of Awesome Alpharetta’s community and its businesses.  I lead a team of professionals who are committed to the development of the most creative tourism promotions and strategies that will attract visitors to all 30 of Alpharetta’s upscale and modern hotels. We strive to make our community a viable place that people would want to visit with lots of shops, restaurants, entertainment venues, music, hotels, art, and history walks.  We need all of these tourism assets to ensure Alpharetta is Awesome all the time.”

The Alpharetta Convention & Visitors Bureau serves as the official Destination Marketing Organization for the city of Alpharetta, Ga. With so much to do, why not stay the weekend? Book a hotel stay at one of the Alpharetta’s 30 modern and upscale hotels directly at www.awesomealpharetta.com. Alpharetta was recently named “One of the South’s Friendliest Cities” by Southern Living Magazine and “One of the Best Places to Visit in Georgia” by Vacationidea.com.

Previous Post: « A Halloween Weekend In Alpharetta That’s Scary Goo
Next Post: Free and Paid Holiday Light Shows Around and About Alpharetta »

Get your coffee passport and have a coffee tasting

What a beautiful night in Alpharetta!! @ladya igni

There are lots of Fall family fun things to do! C