The destination marketing organizations behind Visit Roswell, Awesome Alpharetta and Visit Sandy Springs announced their partnership today to launch the Topside Tap Trail. This brewery trail is comprised of seven branded breweries in metro Atlanta’s “topside”, located in the cities of Roswell, Alpharetta and Sandy Springs, Ga. The trail was created to ensure North Fulton county’s craft beer culture along the GA400 corridor gets the acclaimed recognition it deserves along with attracting visitors interested in craft beer to each city. 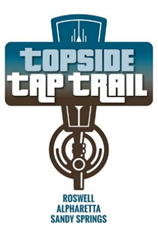 The craft beer industry is thriving in Georgia, and the Topside Tap Trail features seven of the best breweries and brewpubs in the state. Along the trail, beer lovers will find five taprooms and three full-service restaurants offering handcrafted beers brewed on site. When visitors walk into these various locations, they will be among friends, sharing the love of local beer, good food and community.

From The Earth Brewing Company

The first brewpub in Roswell features locally sourced cuisine, world-class beer, and craft cocktails in a fun, easy-going environment. The brewpub offers 10-12 house beers, 4-6 rotating local/regional drafts and a non-alcoholic root beer. The kitchen features chef-driven seasonal fare at a reasonable price. From the Earth is known for naming each of their beers after songs. Additionally, the brewpub books some of the best live entertainment in the Roswell area throughout the week.

Gate City, Roswell’s first brewing company, is located in Roswell’s beautiful historic district. The name is rooted in neighboring Atlanta’s historical moniker as the “Gate City of the New South,” due to its reputation as a hub for culture, commerce and transportation. Gate City strives to brew beers that embody the very same independent spirit. Gate City offers a large taproom filled with highboys, a long bar, and soft seating – with several garage doors that open to outdoor space with tons of picnic tables and a separate private event space.

Variant Brewing Company crafts quality brews with a flavorful taste that compels patrons to share. Their collaborative approach and passion for the art of the brewing process creates experiential blends for the occasional beer drinker and craft beer enthusiast. Matt Curling, Variant’s owner and brewmaster, says the focus is on variety. Variant features a taproom style environment with bar, highboys and tables, as well as a large brick outdoor patio with plenty of room to spread out.

Alpharetta’s first brewery and namesake pays honor to Georgia’s first brewery which opened on Jekyll Island in 1738. Each brew on tap offers up cool nods to the South with clever nomenclature like Cooter Brown, Big Creek, Southern Juice IPA and Hop Dang Diggity. While you’re at Jekyll Brewing, kick back to enjoy a flight of their greatest hits and be sure to tour the brewery to see just how the magic’s made. Jekyll Brewing has recently expanded. The brewery has brought its beers and a new restaurant to Downtown Alpharetta. Their second location includes a tasting room, restaurant, and a rooftop patio three stories above Academy and Market Streets in the heart of Downtown Alpharetta.

Pontoon Brewing Company was the first microbrewery to open in Sandy Springs. Founded by longtime friends with a passion for craft beer and a laid-back lifestyle, they opened the doors to the taproom in 2017. Pontoon’s beers are made with “a relaxing day on the water” in mind, which is perfect for a brewery just minutes away from the Chattahoochee River. Pontoon rotates a list of seasonal and limited-edition beers that are unique and full of flavor.

Visit Roswell is the destination’s convention and visitors bureau. Often referred to as a Destination Marketing Organization (DMO), our organization incorporates targeted advertising and marketing programs with aggressive sales and public relations efforts to build the image of Roswell as a travel destination and increase visitation to our city.

The Alpharetta Convention and Visitors Bureau serves as the official Destination Marketing Organization for the city of Alpharetta, Ga. With so much to do, why not stay the weekend? Book a hotel stay at one of the Alpharetta’s 29 modern and upscale hotels directly at www.awesomealpharetta.com. Alpharetta was recently named “One of the South’s Friendliest Cities” by Southern Living Magazine and “One of the Best Places to Visit in Georgia” by Vacationidea.com.

Visit Sandy Springs is the Destination Marketing Organization for the city of Sandy Springs, Georgia. Bordered by Atlanta to the south and the Chattahoochee River to the north, Sandy Springs offers the perfect mix of city life and outdoor adventure. Stay in one of the city’s 21 hotels, and enjoy its celebrated dining scene, 950 acres of parks and greenspace, 22 miles of Chattahoochee River shoreline, and convenient access to downtown and metro Atlanta attractions. For more information, please visit www.VisitSandySprings.org.

Press release provided by the Alpharetta Convention and Visitors Bureau. AlpharettaMoms.Org is proud to have the CVB as a sponsor and to bring you all the information I can on the community.

It’s snowing 🌳 😜 on this beautiful spring

END_OF_DOCUMENT_TOKEN_TO_BE_REPLACED

At the Downtown Alpharetta Farmers Market you will find farmers with fruits, vegetables and natural meats, gardeners with fresh flowers and herbs, and makers of all sorts of edible home goods from yummy desserts and...